Skip to Main Content
It looks like you're using Internet Explorer 11 or older. This website works best with modern browsers such as the latest versions of Chrome, Firefox, Safari, and Edge. If you continue with this browser, you may see unexpected results.

Special Collections is a highly-specialized repository of primary source research materials related to the fields of fashion and design.

Although now sadly mostly out of fashion, for centuries headwear was an absolute must to complement any outfit. From the top hat to the swim cap, toques to ribbons, headwear reflected the trends of the time. In this digital exhibition, SPARC Intern Claire Kalikman curated one dozen of the best examples of fashionable headwear featured in SPARC's periodicals collection. She strives to show what influenced the way fashionable headwear changed through the decades, from the 1770s to 1920s. We hope this will be an enjoyable way for you to discover some of SPARC's rarest and most precious periodicals.

Most of the information for this exhibition comes from FIT's Fashion History Timeline. 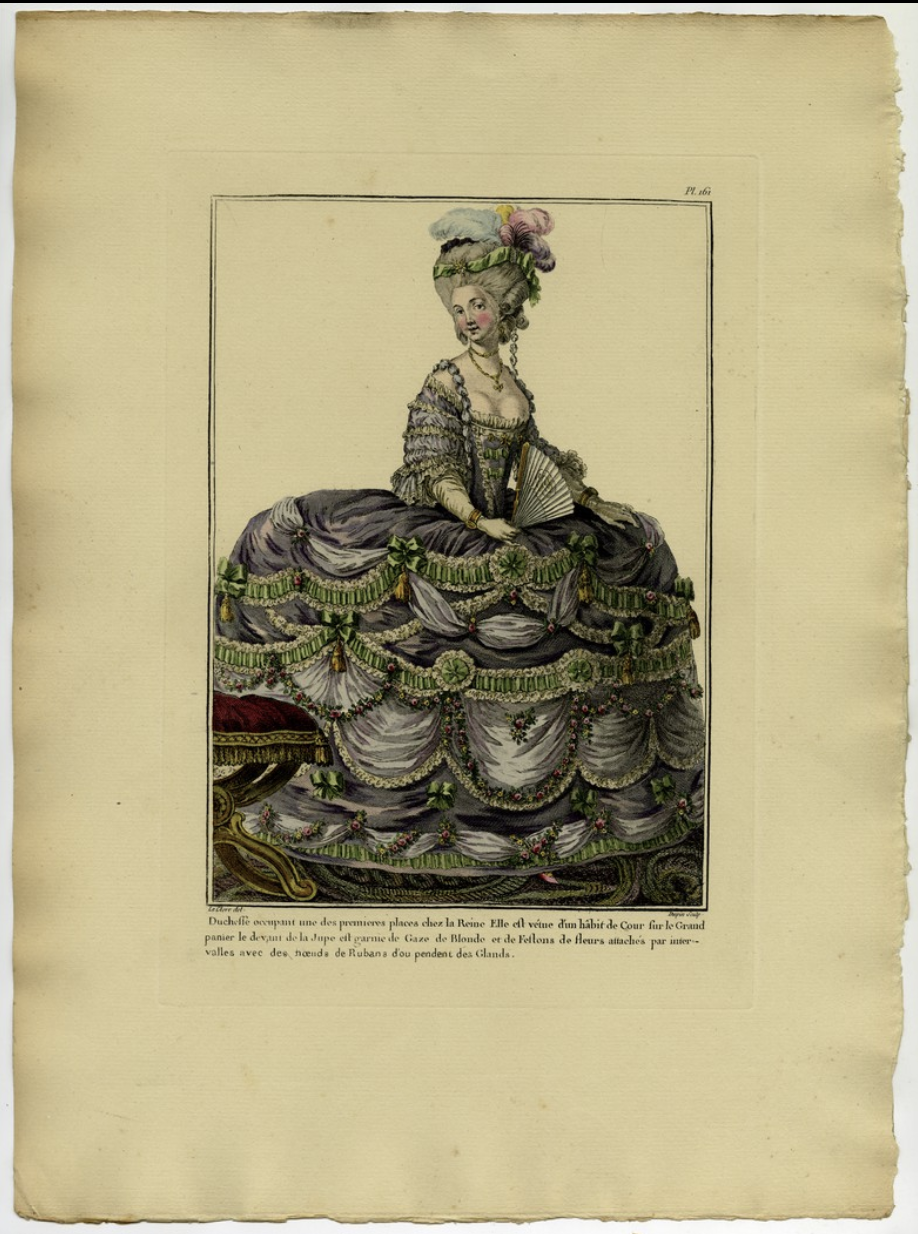 In the 1770’s, huge wigs and hairstyles were fashionable, certainly influenced by Marie Antoinette’s penchant for ever-larger hairdos. Hairstyles were so large in fact, that the ‘calash’ bonnet was worn to protect the high hairstyles from the weather. Collapsible bonnets, they were made of strips of wood or whalebone sewn into channels of a silk hood. A front ribbon allowed the wearer to hold the calash securely over her face while walking in the wind. 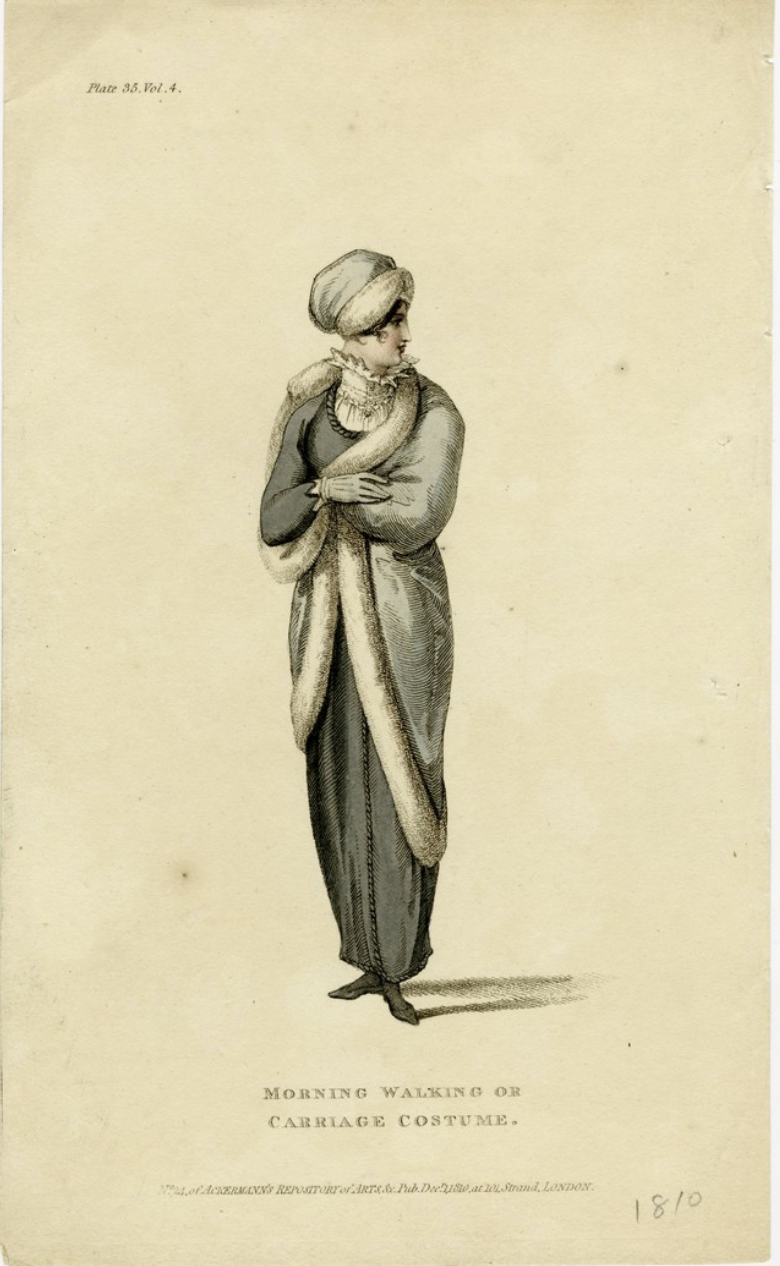 Turbans, brought to European fashion through Napoleon’s occupation of Egypt, became a stylish choice in the 1810s. Scholars often link visual examples of “Orientalism” alongside the Romantic literature and music of the early nineteenth century, a period of rising imperialism and tourism when Western artists traveled widely to the Middle East, North Africa, and Asia. 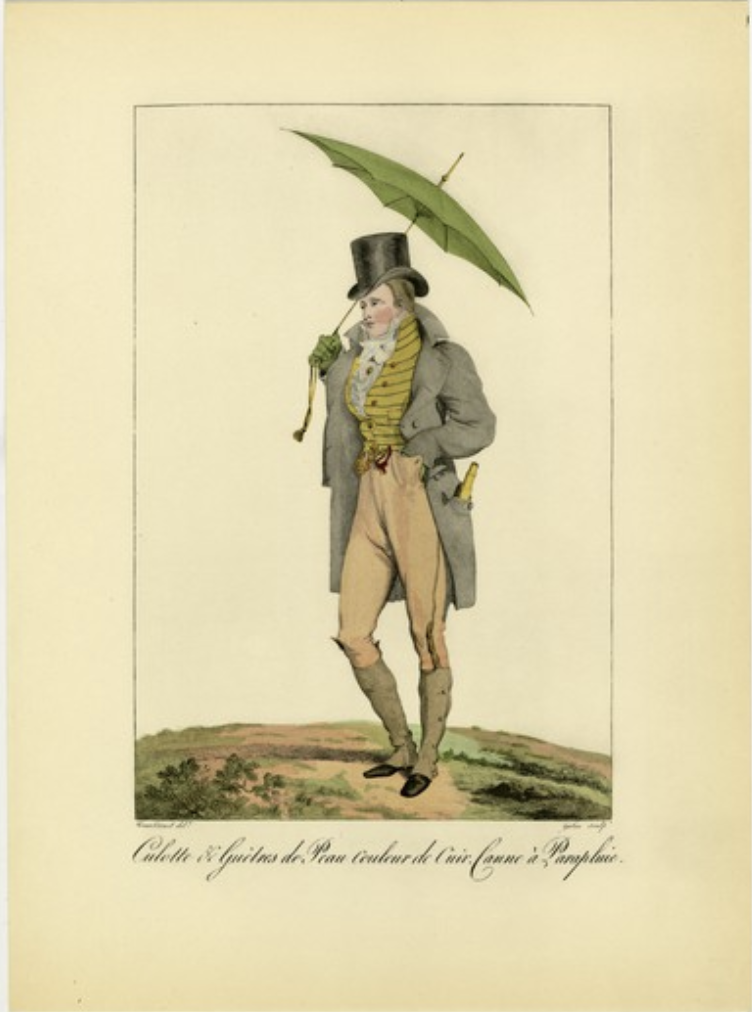 A man’s ensemble in the 1810s was not complete without a hat. The top hat was the favorite form of headwear, available in a wide range of shapes and colors. For evening, the chapeau-bras was a stylish choice, flat and foldable to be carried under the arm. 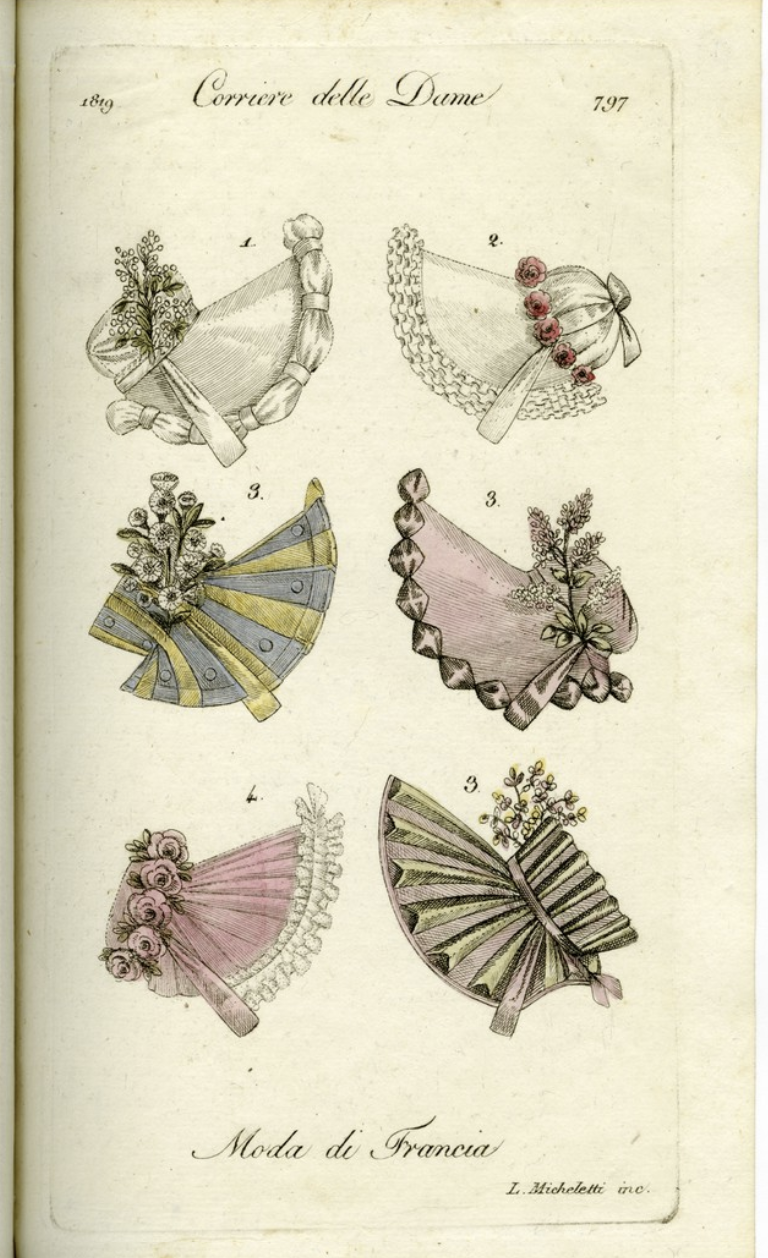 There was a stunning variety of hats, caps, and bonnets in the 1810s. White cambric or muslin day caps were worn indoors by married or older women. Outdoor hats and bonnets ranged from the face-shielding poke bonnets, to tall conical hats inspired by the shakos worn with hussar uniforms. Overall, millinery grew in size and trimmings as the decade wore on. C.W. Cunnington wrote: “as the Gothic taste grew, from 1812 onwards, they shot up into the air with extraordinary exuberance.” 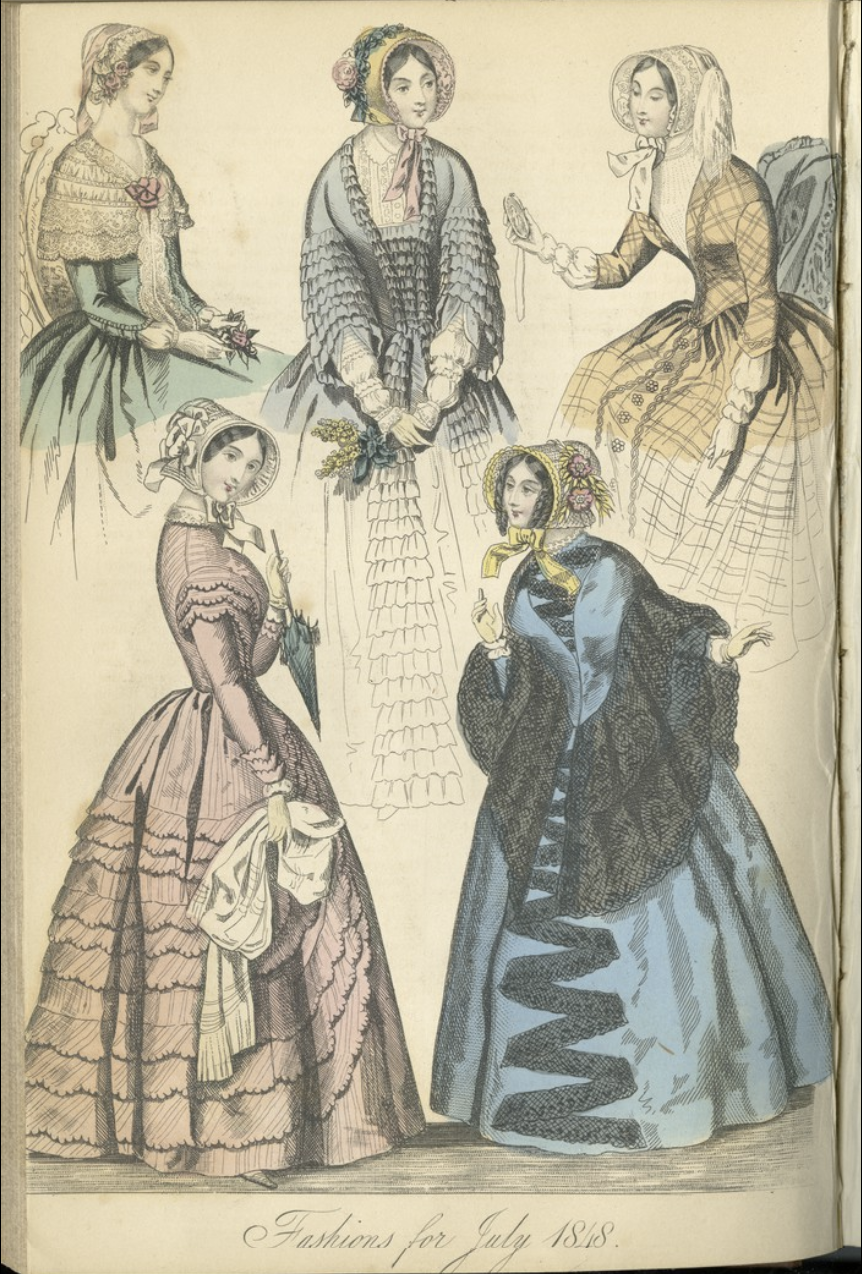 In the 1840s, the bonnet was the universal choice for outdoor millinery. It became closely fit and the crown became indiscernible from the brim, which curved down around the face, sometimes even so far that it blocked a woman’s vision. Fashion historian Jane Ashelford notes that in the 1840s, “fashion illustrators no longer depicted the fashionable lady as a spirited and animated being, but rather as a timid, reticent and self-effacing person sheltering behind the ever-encroaching brim of her bonnet.” 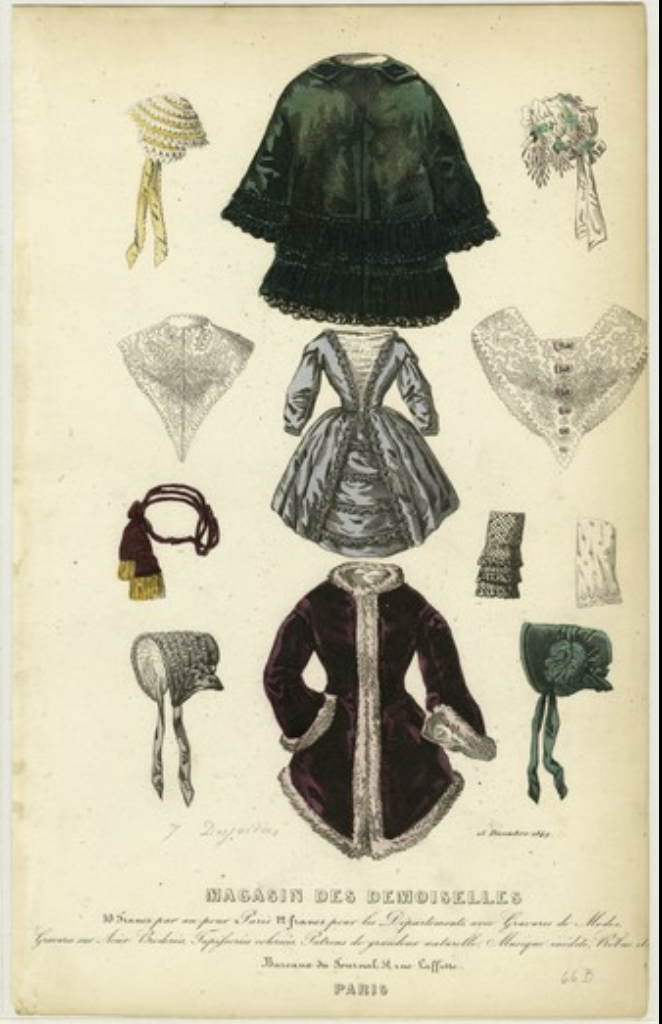 This flat lay shows the garments of a typical outfit in 1849. The yellow and white cap in the upper left corner and the green cap in the upper right appear to be caps that would have been worn in a more casual, daytime, indoor setting. The bonnets in the lower left and lower right are typical of outdoors wear. Note the long brim, which was typical of this time period. 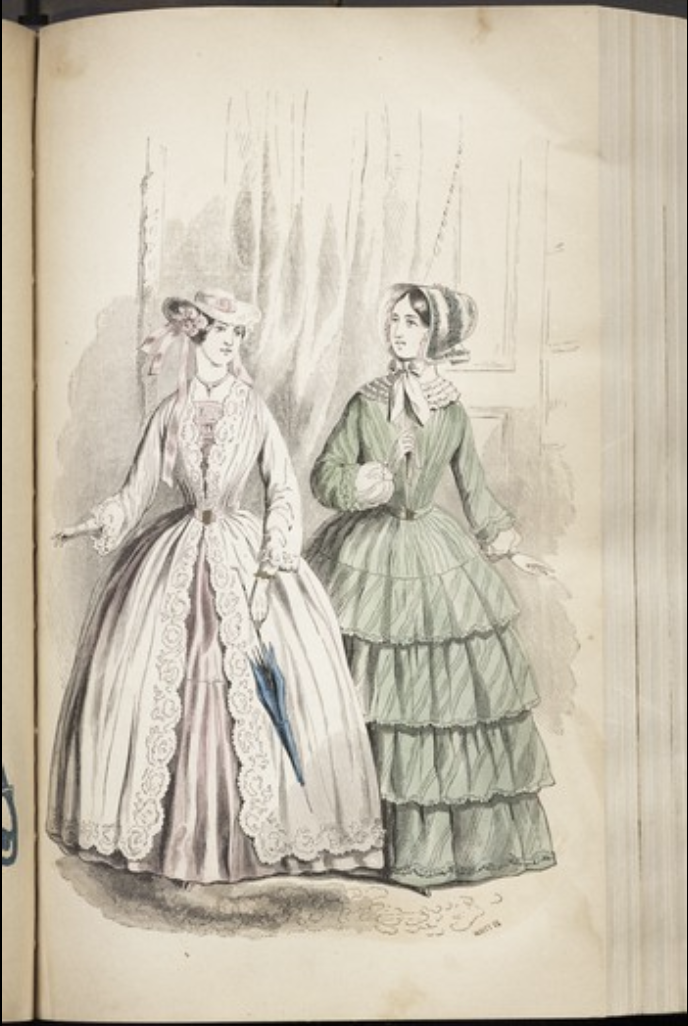 On the right, a woman wears a bonnet in the new 1850s style, which had a shorter brim. It was worn further back, exposing more hair. On the left, the woman appears to be wearing a wide brim straw hat, which would have been a favored style for the outdoors. 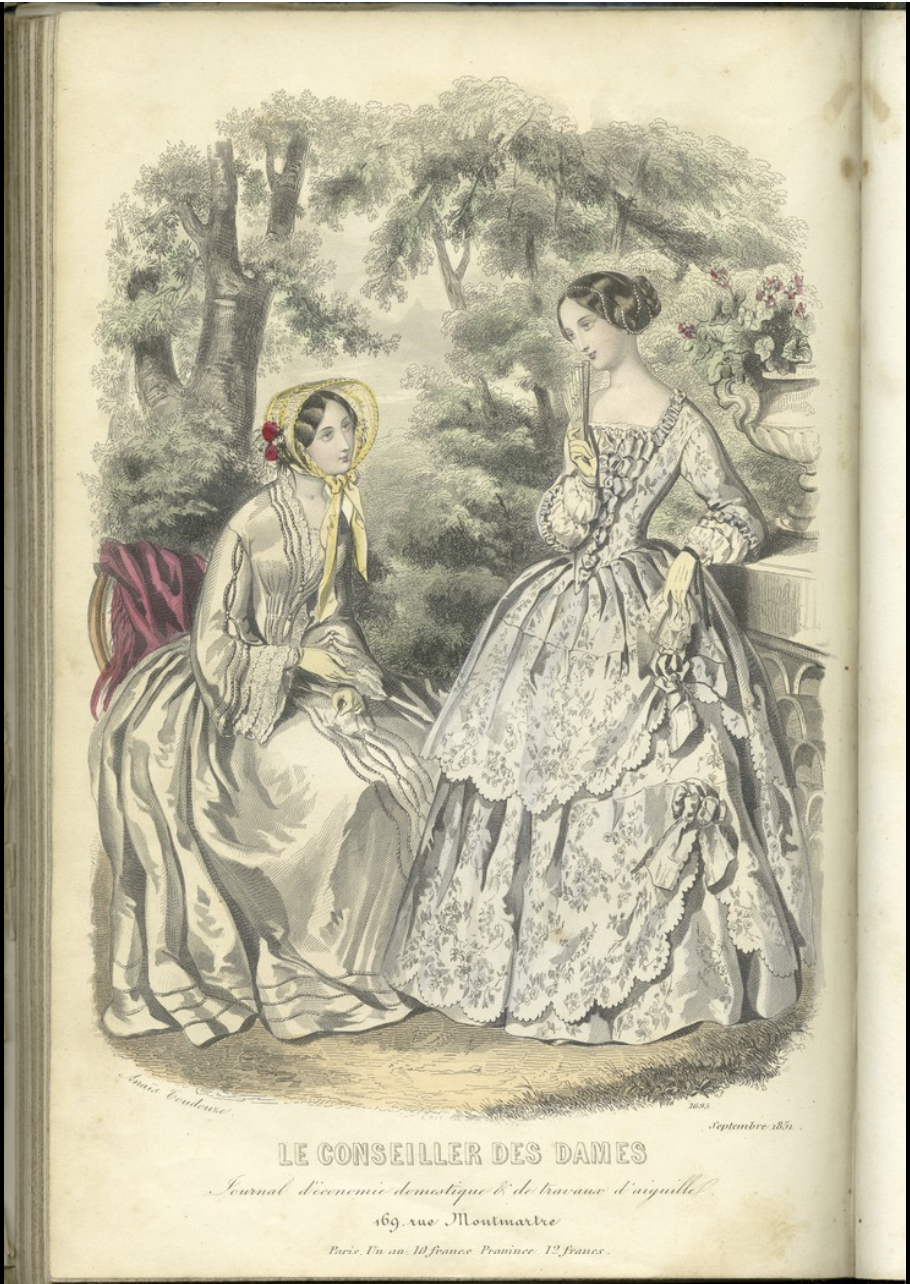 The hairstyle in the 1850s was parted in the center, brushed down and arranged heavily on the sides, completely covering the ears. Bonnets, defined as a hat tied with strings under the chin, remained the vastly dominant choice of millinery. 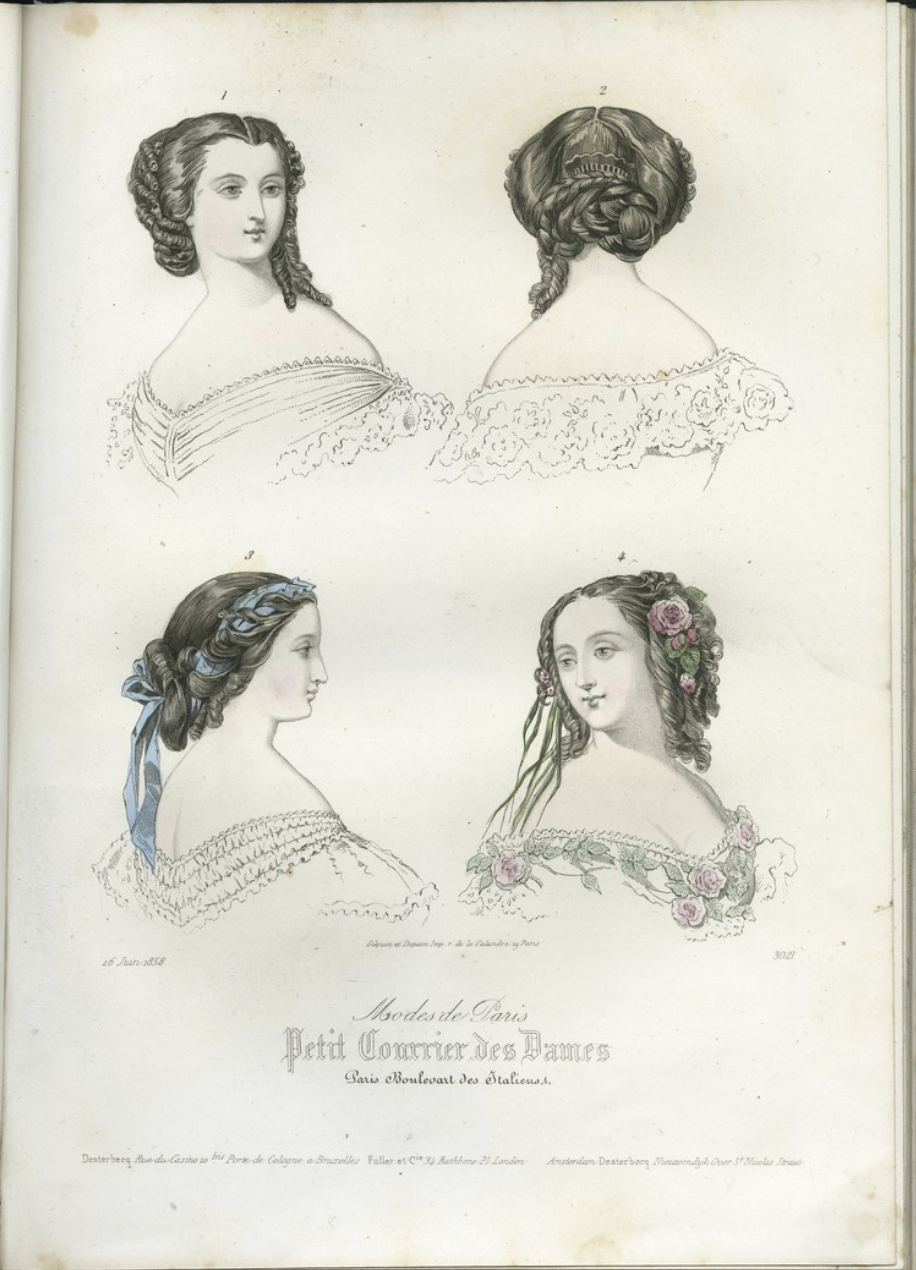 In 1857, the padded wing hairstyle was the height of fashion. The hair, still parted over the middle and pinned up in the back, extended over the ears in thick pads or rolls. The ribbons emphasize the intricate rolls on either side of the face. 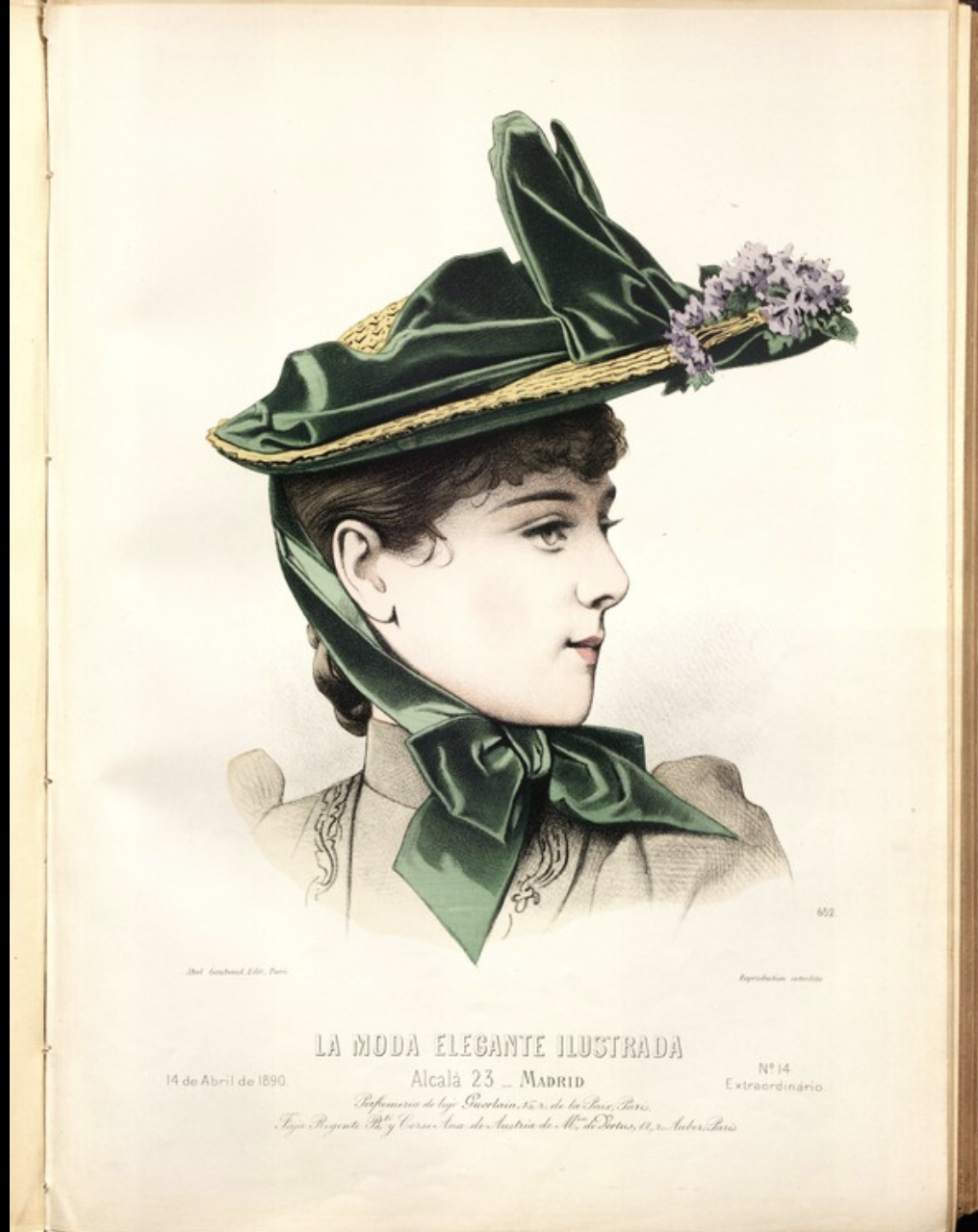 Usually, 1890s hats were wide and heavily trimmed with tall upwardly curling feathers, ribbons, and flowers. Often hat trimmings were excessive; a common decoration was an entire stuffed bird. Toques, a hat without a brim, were also fashionable, worn perched at the top of the head. 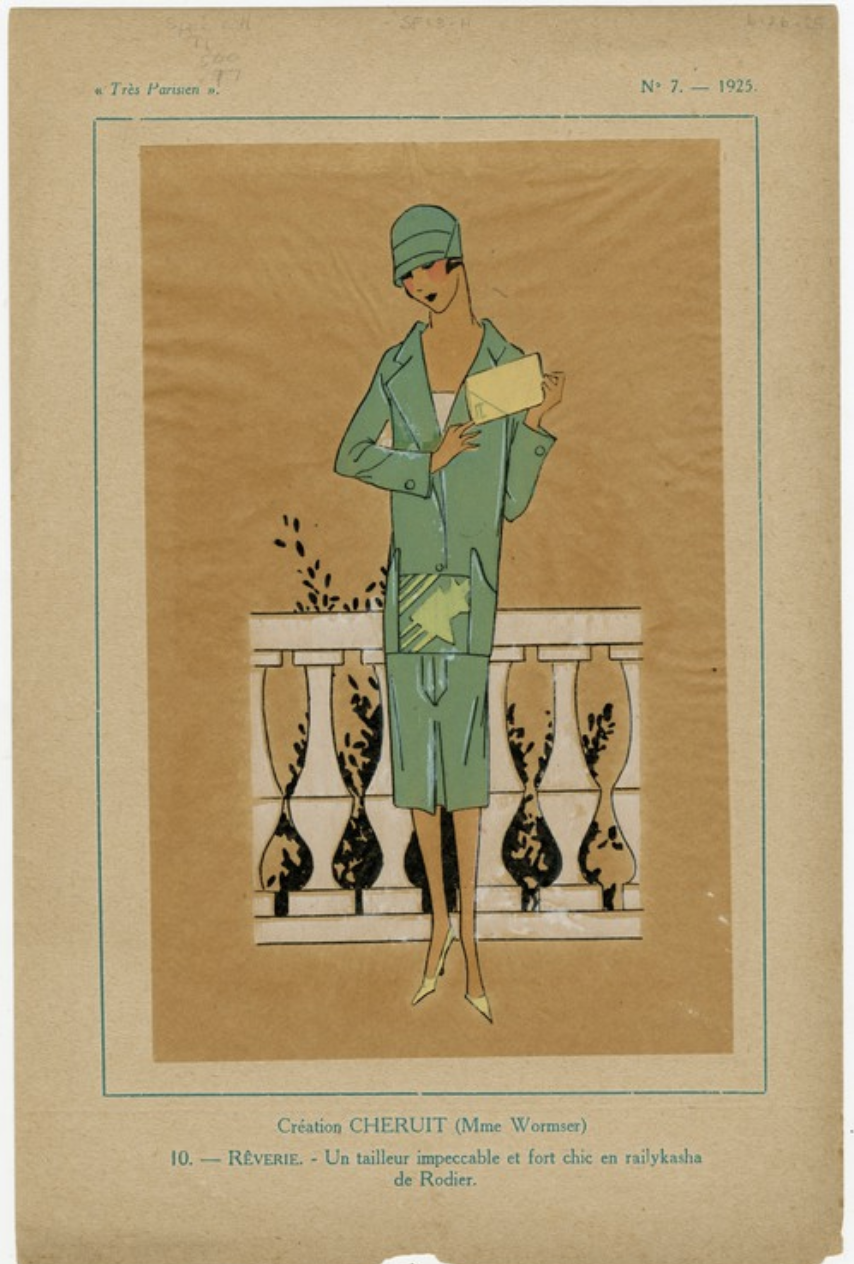 The iconic hat of the Jazz Age was the cloche, which is French for “bell.” Its popularity began around 1925, dominating hat style well into the 1930s. A woman needed to have a small head and a short “bobbed” haircut to fit under the ever-increasing tightness. These close-fitting hats were worn low over the eyebrows, making visibility difficult. Women walked with their chins up and eyes cast down creating an air of feminine independence. 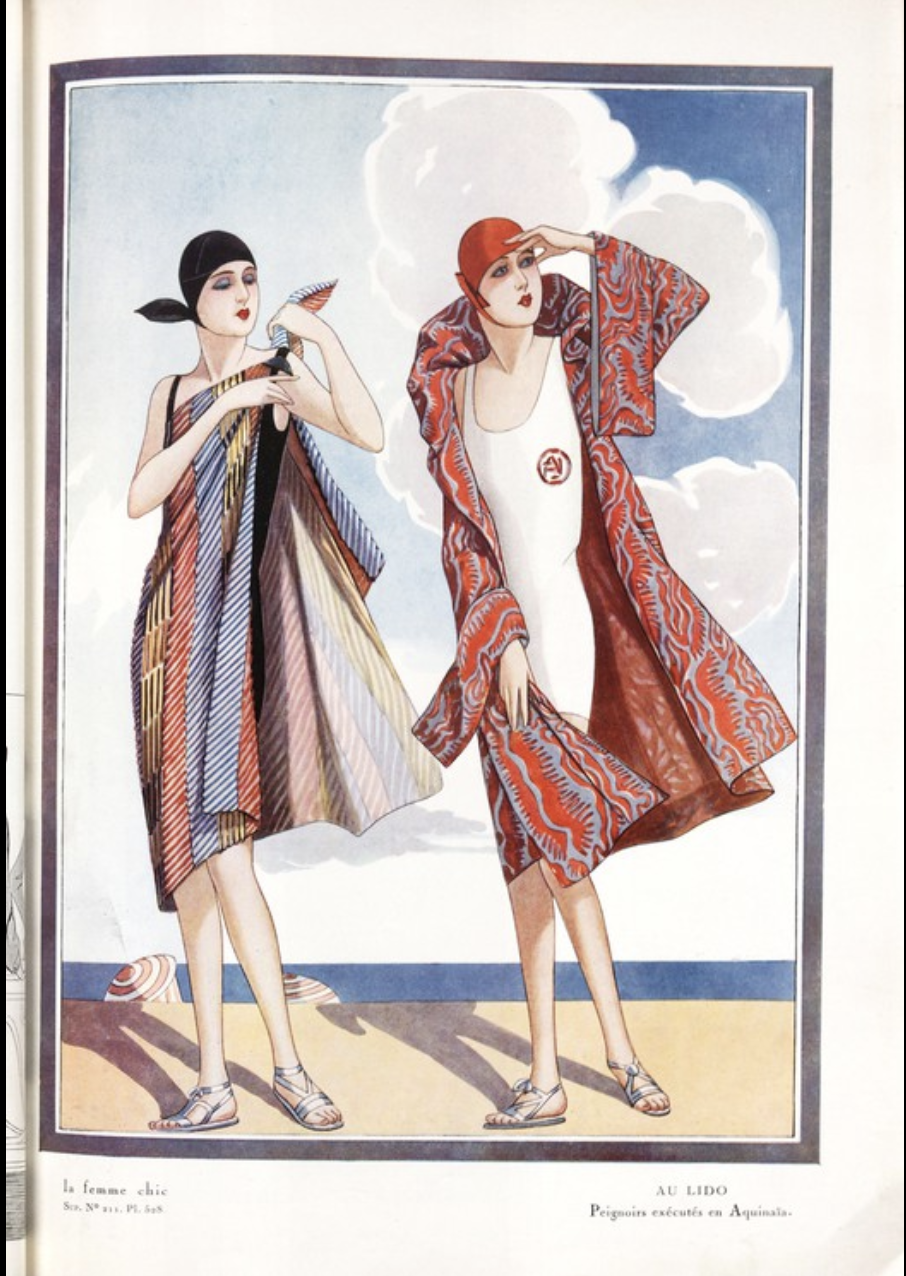 Early modern swim caps looked like aviator helmets; they had chin straps to hold them in place. By the roaring '20s, the invention of latex had led to the making of stretchier swimcaps that fit right in with the styles of the day, considering head-hugging cloches were very popular. Swim caps were actually required at many pools for the first half of the 20th century to keep women’s long hair from clogging up the drain.